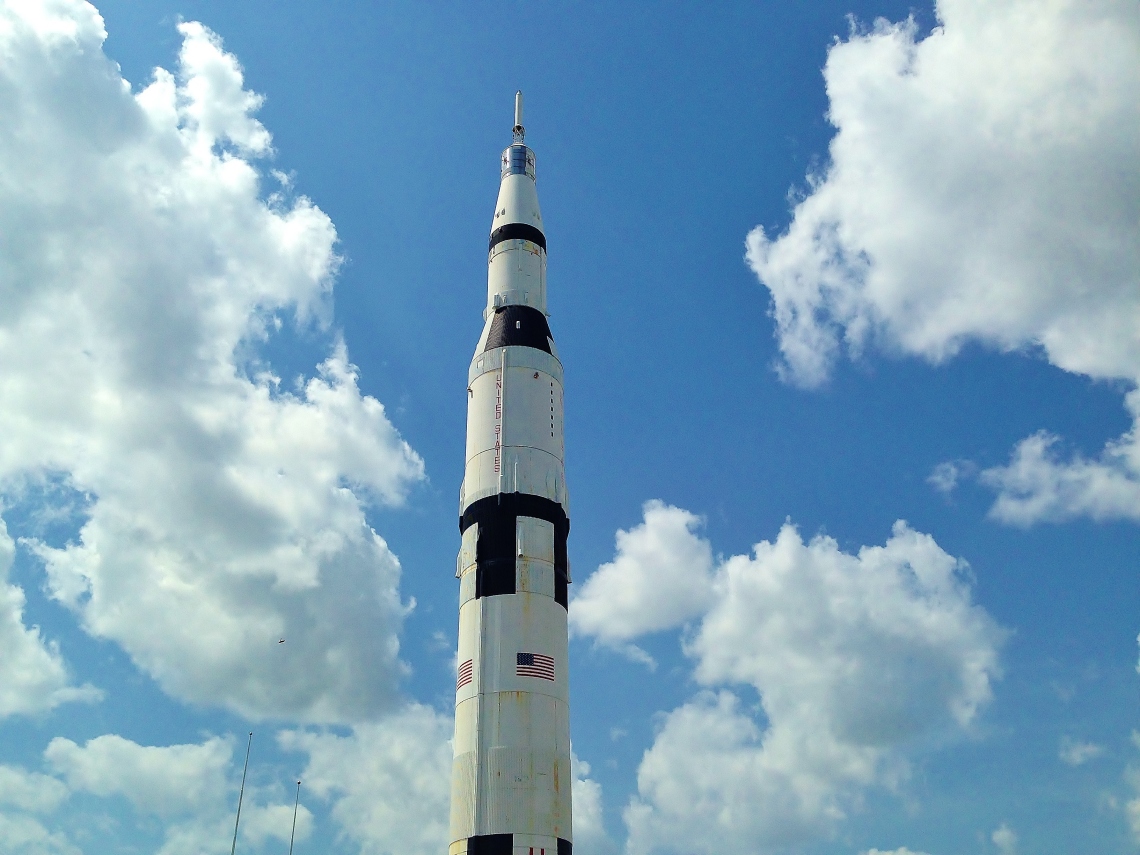 Astronaut is the career I’ve always kept in my back pocket. As in, “Well, if this writing thing doesn’t work out I can always be an astronaut.” There are others, of course — professional tennis player, long haul trucker, theoretical physicist, train conductor, flight attendant, assistant manager at the GAP — but astronaut has been the go-to for as long as I can remember. It’s the perfect daydream fodder for times when work is dragging on or I have writer’s block: I could be floating in outer space right now. All I’d have to do is go back to college and choose a different major and join the Air Force and learn to fly and overcome my crippling fear of heights, flying, and darkness, but I could totally do it.

As a potential future astronaut, the US Space & Rocket Center in Huntsville, Alabama was a no-brainer destination. A mere two hours from Nashville, it’s an easy road trip straight down I-65 South. A couple weeks ago, Nick and I finally got the chance to go.

I’d been dying to visit ever since we drove past the famous roadside rocket on our way to Florida and I had an early mid-life crisis about every choice I’ve ever made that didn’t lead to a career at NASA (what have I been doing with my life?!?!). When we finally pulled into the parking lot, my demeanor could best be described as “poorly trained, easily excitable terrier arriving at the dog park,” but maybe even more excited than that because this metaphorical dog park was actually the BIRTH PLACE OF AMERICA’S SPACE PROGRAM. 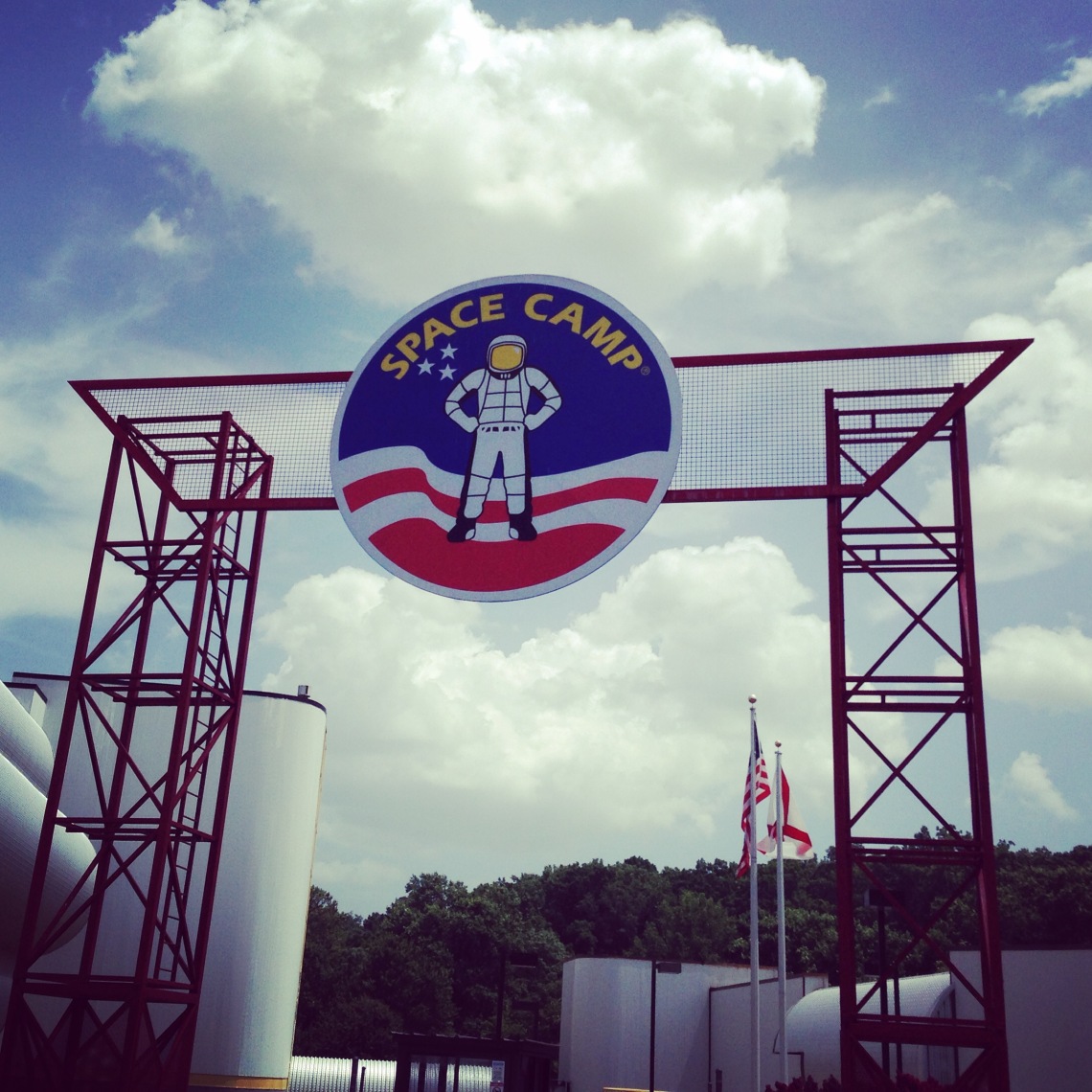 We entered through the gift shop, making mental notes of all the NASA-branded swag to purchase on the way out — mousepads, keychains, flight suits — check, check check. Then we continued on to the exhibits: an in-depth collection of artifacts and technological innovations that ultimately put Apollo astronauts on the moon. Like the t-shirts in the gift shop said, “Actually, it IS rocket science.”

The museum part of the Space Center is an odd mix of state-of-the-art and painfully dated. Behind a thick pane of glass that seems like it should house an impressive chunk of meteorite or a reanimated alien, there’s instead a painstakingly detailed recreation of a previous NASA director’s office. The diorama includes a desk, a chair, and a TV screen looping a video of his secretary talking about how, despite his genius IQ, he could never remember his umbrella (I feel you, dude).

Upstairs, in an exhibit dedicated to the International Space Station, another TV screen grabbed my attention as I was walking by. “You’re probably wondering how we go to the bathroom in space,” a male astronaut, floating in zero gravity, said earnestly into the camera. I stopped, looking behind me momentarily as if to make sure this pre-recorded video from the 80s was, in fact, talking to me. Then I happily parked myself in front of the screen for the next 10 minutes to enjoy his explanation and reenactment of disposing of human waste in space. I’m not going to spoil it for you, but I will say it involves a lot of suction tubes.

After learning about NASA directors’ interior design preferences and the intricate art of pooping in space, Nick and I ran outside to the best part of the museum: Rocket Park. Rocket Park is exactly what it sounds like: a park full of rockets. We cantered back and forth between rockets, staring up at them in awe, climbing around underneath, trying and failing to capture a perfectly timed “jumping in front of a rocket” photo. 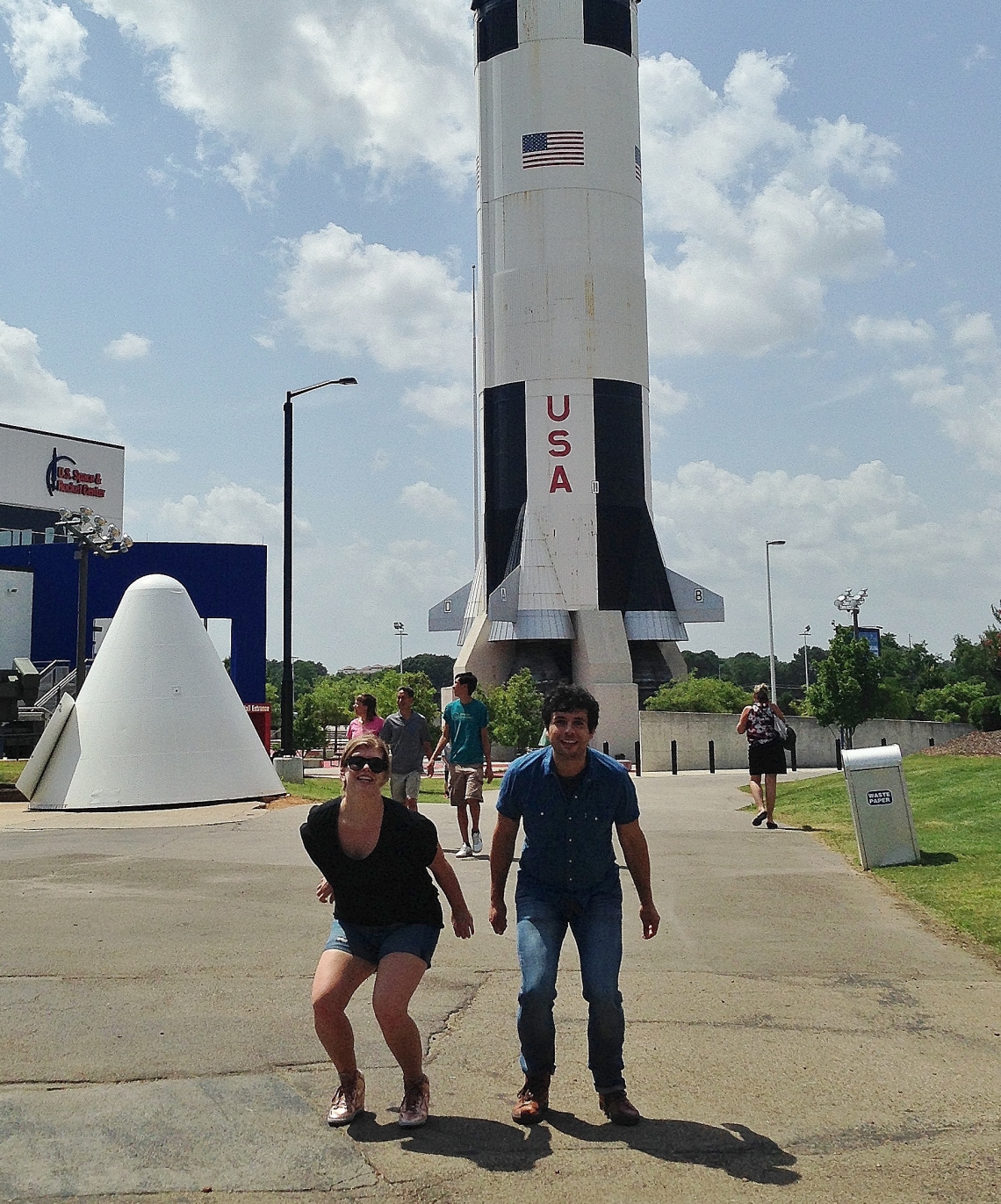 I was staring up at one of the rockets, gleefully swearing under my breath, when Nick gasped. “They have rides!” he cried and grabbed my hand. “Come on! Let’s go!” (Apparently both of us turn into excitable children when exposed to the magic of Rocket Park.)

Nick pulled me over to a blastoff simulator ride, where they strap you into a seat attached to a giant column and launch you 140 feet into the air at a speed that approximates blasting off in an actual rocket. It looked like a terrifying, unpleasant experience. I’ve never liked rollercoasters or thrill rides of any kind. At amusement parks, I tend to skip any ride that has a minimum height requirement and go straight for the kids’ rides, bickering with the attendant about the maximum height requirement (“Listen, if I take off my sandals and arch my back slightly we can both see I’m short enough for the Thomas the Tank Engine Toddler Express!”). Nick is exactly the opposite: he loves any thrill ride, the scarier and more vomit-inducing the better. He happily joined the hordes of middle schoolers in line for a ride. I hung back behind the spectator barricade with the other grandparents and chaperones.

“How are you gonna become an astronaut if you’re too scared to ride the blastoff simulator?” Nick yelled as he was strapped into his seat between two giggling 12-year-old girls, all their legs dangling freely beneath them.

“Maybe I could be a land guy,” I said, “like George Costanza in the Coast Guard?”

Nick laughed just as the ride launched into the air. He rode it 7 more times. He didn’t even take a break between blastoffs. He just stayed in his seat, letting different tweens fill in the empty spots around. Upon further reflection, I think maybe Nick is the one who should be an astronaut, if he ever gets tired of being a pastry chef. 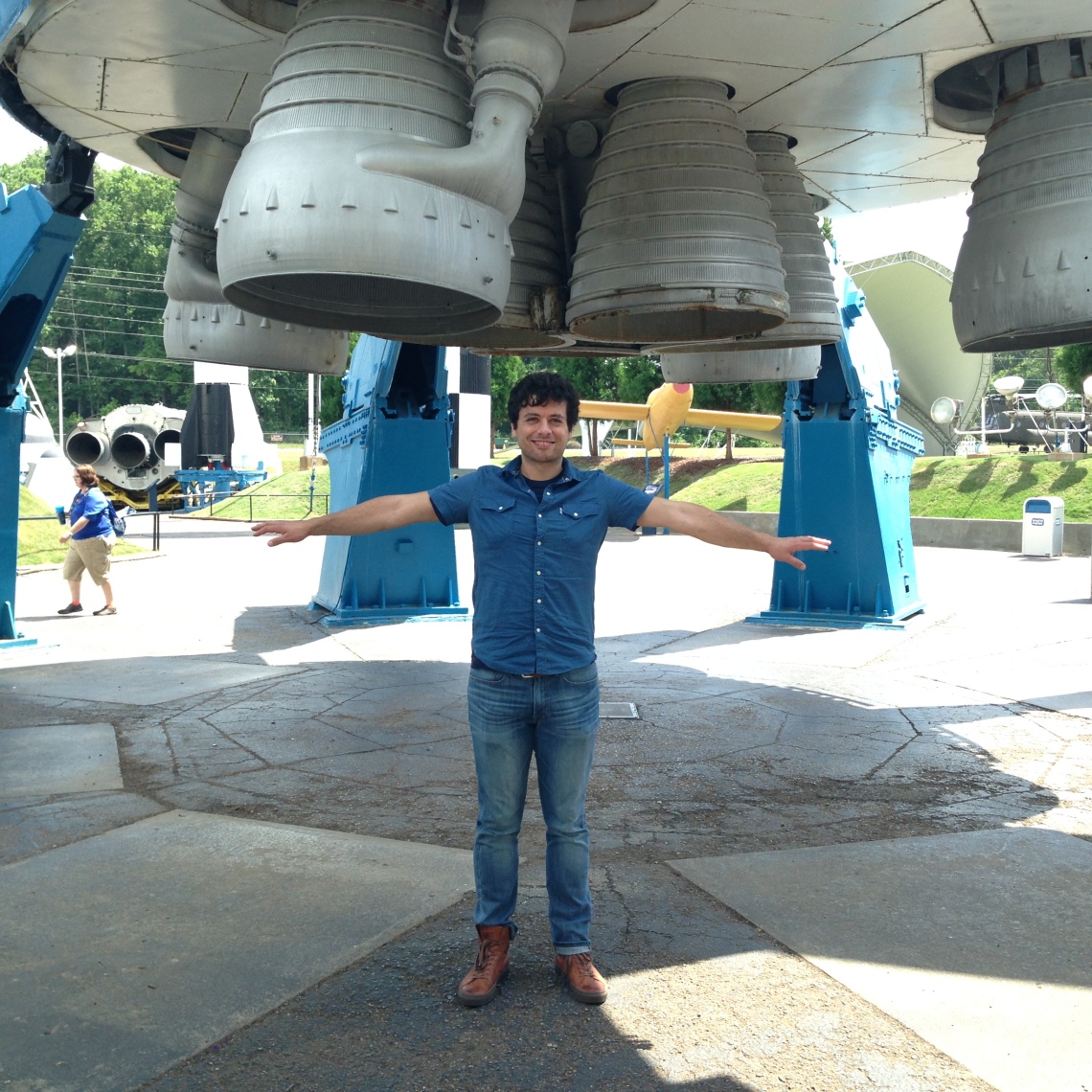 I did, however, go on the other ride in Rocket Park: the G-Force Accelerator, a spinning circular pod that uses centripetal force to simulate 3 Gs pushing on your body. We watched the group ahead of us stumble out, tripping over their feet and massaging their cheekbones. Then we walked into the lowly lit circle, about the size of a studio apartment, and strapped ourselves into place against cushions ringing the inner wall.

A joyless woman in the middle of the circle operated the ride. The lights turned off when the ride started, but I could see her face remained expressionless even as the speed increased and all of the riders’ cheeks were pulled back against the wall.

“What do you think it’s like to be in here all day?” I struggled to yell to Nick, summoning all my strength to move my jaw enough to form the words.

“I don’t know,” Nick mumbled back.

“Do you think she ages in reverse?” I asked.

“Why would she?” said Nick.

At this point I noticed a group of teenagers on the other side of the circle trying to get my attention (we were two of about 7 adults in attendance at the park that day). Trying to get someone’s attention in a loud metal sphere when your entire body is being pasted against a wall under the force of 3 Gs requires quite an effort, but they somehow managed to twitch and peep enough to do it.

I strained to raise my eyebrows in their general direction, a tiny gesture meaning, “Yes? How can I help you? I’d be more friendly under other circumstances but I can’t move my face right now.”

“Your shoes!” they yelled, as the G-forces ramped up and their cheeks were pulled taut. “They’re…on….fleek.”

I can now confirm that shoe compliments are 10 times better when received in 3Gs, and if that wasn’t worth the price of admission to the rocket museum, I don’t know what is. 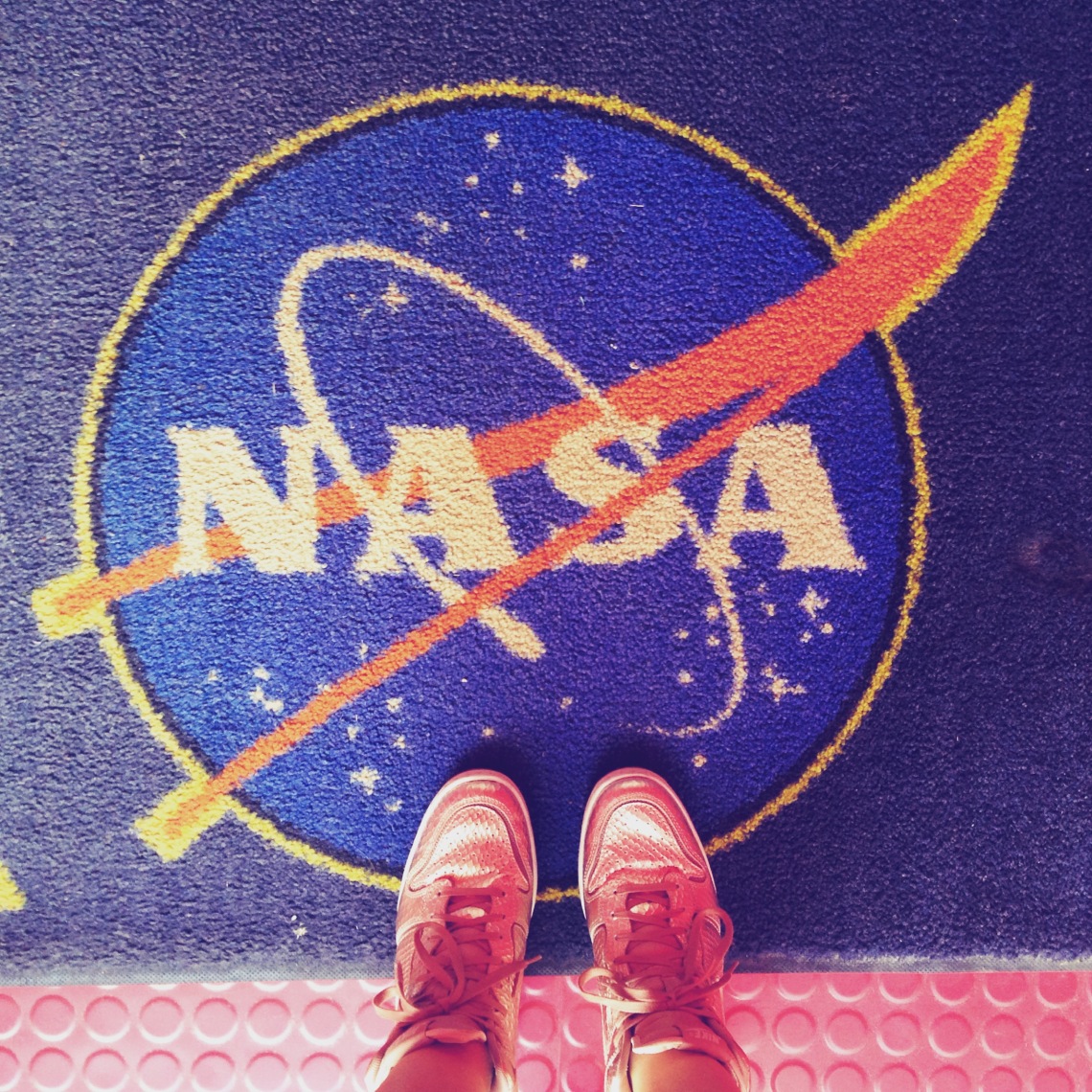 On the way out of the Space Center, chewing the requisite astronaut ice cream Nick bought at the gift shop, we talked about how much fun we had, and how we couldn’t wait to come back. On the way home I checked to see if NASA had listed any astronaut jobs on Craigslist, you know, just in case.