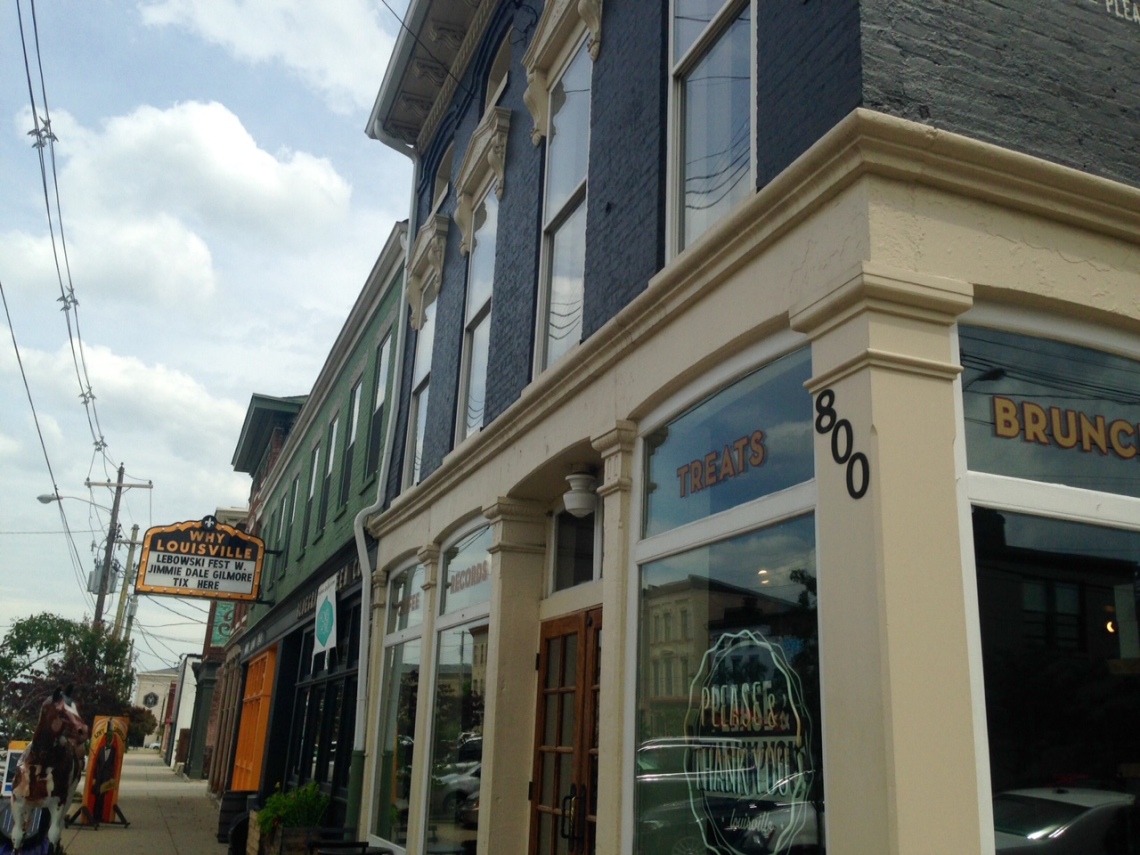 We chose a weird day to go to Louisville.

It was a Monday, first of all. My brother Devin had been visiting from Portland, and was leaving super early the next morning. My boyfriend Nick had just worked something like 11 days in a row, early morning shifts, and was enthusiastic but understandably exhausted. A formidable thunderstorm that had sparked tornadoes across the midwest was headed our way, pointed directly at the route from Nashville to Louisville. If you’ve never been in the south just before a big storm, believe me when I tell you it’s a strange experience, on a few different levels. The atmosphere is uncomfortably hot and balmy, punctured by sharp wind gusts and crackling with electricity. There’s something else in the air though: anticipation. You can feel how close the storm is, how badly the sky needs to break open and release all that built-up rain and lightning and fury. The best way I’ve found to describe it is, “Imagine you’re crammed inside someone’s nose and they’re about to sneeze…for like 6 hours.” It fucks with your sinuses and your emotions equally. Before a storm, I get a migraine and a nagging sense of anxiety that doesn’t let up until the first clap of thunder.

On that Monday morning, getting ready to leave, I felt a familiar throbbing in my temple. But we wanted to take Devin on a southern road trip and damnit, this was the day we were going to do it. The three of us piled into my car at 8AM. Nick fell asleep in the passenger seat almost instantly, leaving Devin and me to practice raunchy Italian phrases and civil war trivia for the three hour drive.

By the time we arrived we were starving. We followed signs off the highway pointing toward a “historic district” – because that must be cute, right? – and stumbled across an adorable little bakery called Nord’s. A quick Googling revealed this was one of the “must eat” places in Louisville. How serendipitous! How meant to be! So even though none of us were particularly in the mood for sweets, but hungry and tired and in dire need of protein, we went in.

We were met by large glass cases full of donuts and a woman with one of those faces that exudes sunshine. “Morning, y’all!” she said. “What can I get ya?”

We each chose a donut, and she asked how our day was going while bagging them up. I told her it was our first time in Louisville.

The woman smiled. “Well,” she said, “We need to get you a welcome gift!” She grabbed some extra donut bags and started filling them with donuts — filled donuts, jelly donuts, eclairs, maple bars, cinnamon swirls. She held up a maple bar coated with crushed nuts and cinnamon. “This is my favorite kind,” she said, filling up a bag with 4 of them and handing it to Nick, “and I don’t even like nuts!”

We thanked her profusely and left with 3 armfuls of donut bags. Nick spotted a coffee shop just down the block, so we waddled over, ordered iced coffees, and sat down in a corner to enjoy our spoils. I took a bite of the cinnamon nut bar that was the donut lady’s favorite. It was so good I finished it off in 3 bites.

Devin, who can give you a detailed breakdown of any movie star’s fitness regimen and is prone to saying things like, “My body is a temple,” ate half a custard-filled round before announcing that was the first donut he’d eaten in 10 years and he could already feel the sugar poisoning him. Nick and I ate two donuts a piece. Maybe two and half. Maybe three. Maybe four. Maybe five. Those minutes are kind of a blur now, to be honest. A sweet, delicious blur. 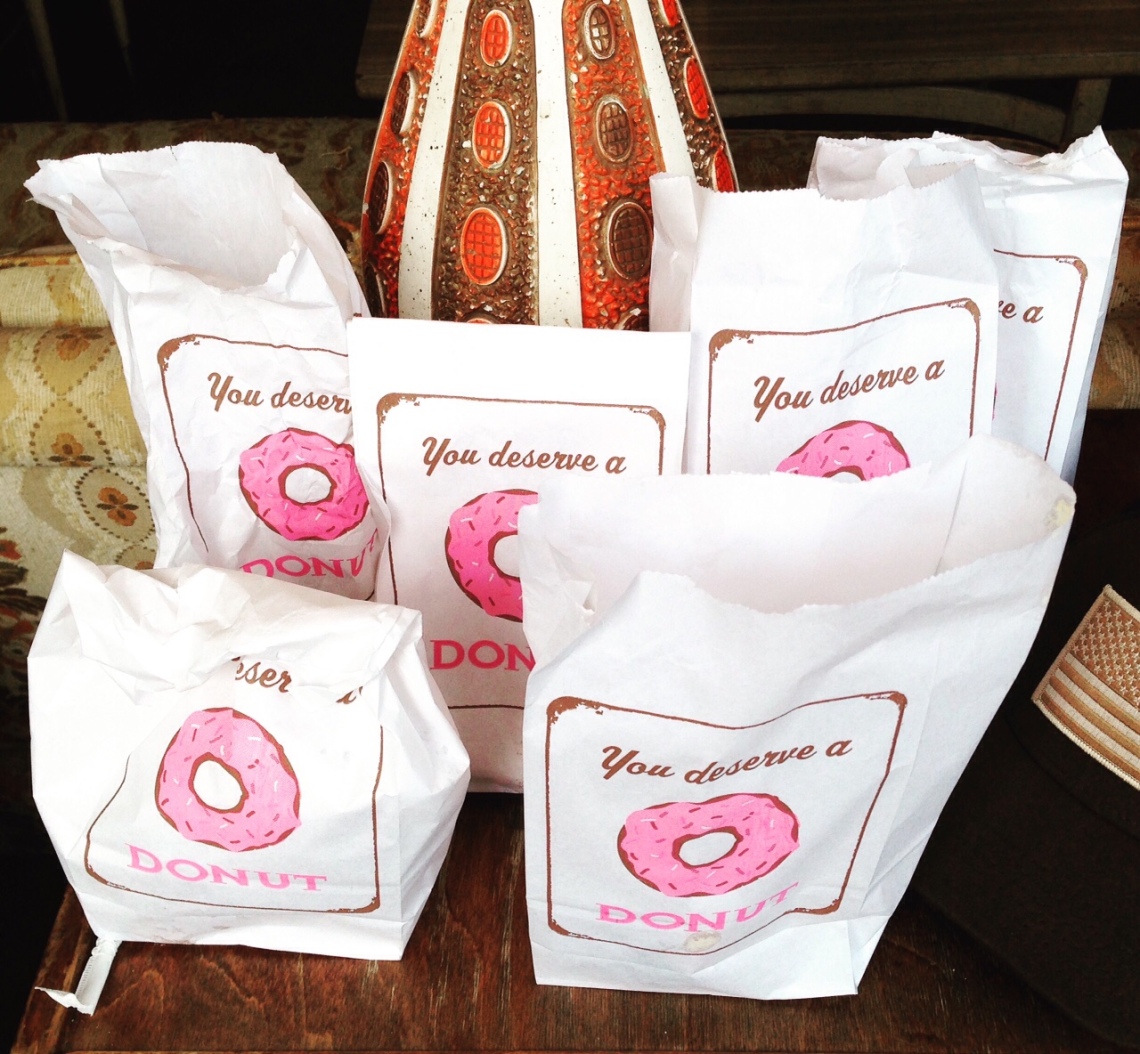 Dangerously high on sugar, we crammed the leftover donuts in the trunk and piled back into the car to head downtown.

I have an annoying tendency to latch onto a word or phrase that I believe sums up whatever new place I’m exploring, and then repeat it nonstop for the entire time I’m there (in Birmingham, for example, after seeing a number of impressively sculpted hairstyles, I kept saying, “People here are so well-groomed!” until Nick was finally like, “What does that even mean?”). In Louisville that word was “urbane,” as in, “This place is so urbane! People here are so urbane! Look at that guy! Look how urbane he is!” I think Devin actually said it first, while we were navigating the hurried swathes of young professionals on their lunch break downtown, but I fixated on the word because it perfectly summed up my surprise at how different Louisville was from Nashville. They’re both friendly southern cities to be sure (just ask the free donut lady), but Louisville struck me as more formal and sophisticated. People here were more dressed up, a little more serious. The downtown area is rich in history, full of  brick buildings and candy-colored storefronts, but there’s a sense of modernity and worldliness that reminded me more of downtown Seattle than other southern cities I’ve been to. 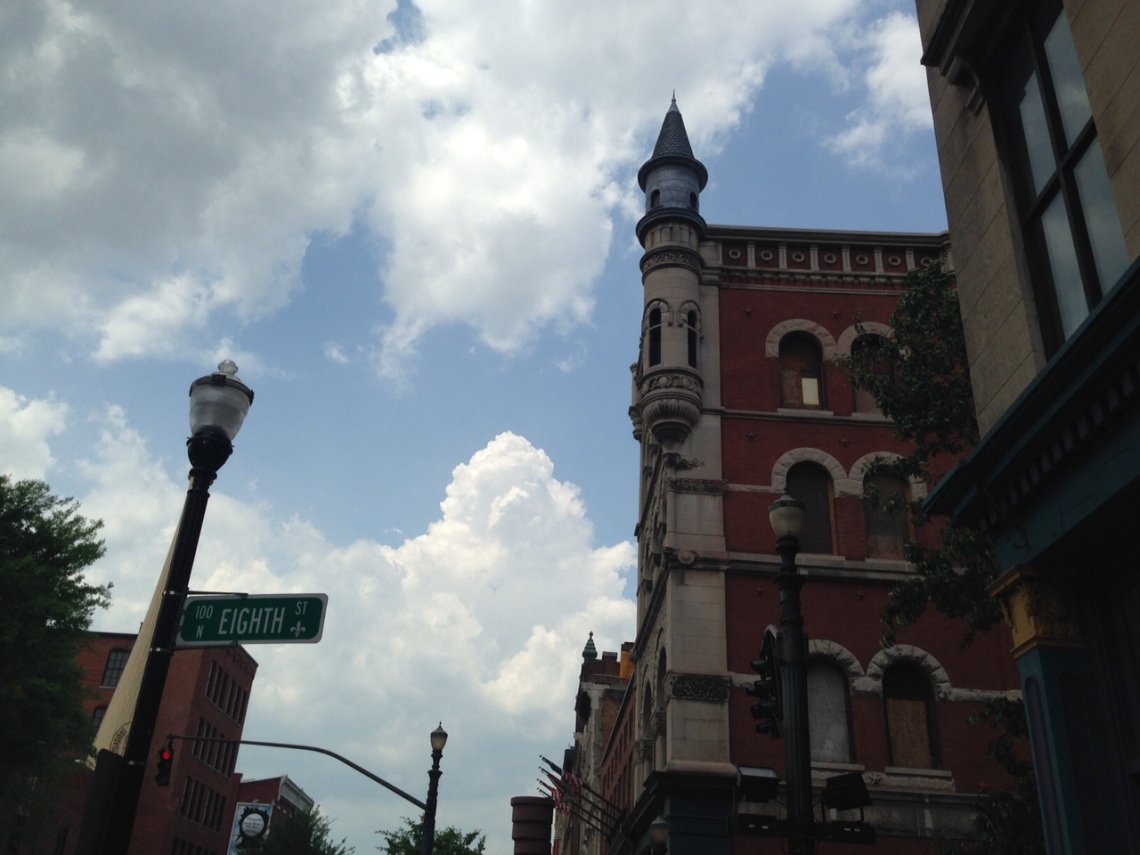 We walked along Main Street for a bit before ducking into a gorgeous little cafe called Proof for lunch. After sitting down we realized the restaurant was connected to a hotel which was also a modern art gallery (say it with me now: how urbane!). The route from our table to the restrooms was stocked with large-scale paintings, sculptures, and interactive exhibits. A tiny television screen over the sink in the women’s bathroom flashed staticky video of a man’s eyes watching you as you wash your hands. Unsettling, but cool — the way art should be, right?

Everything we ate for lunch – a bison burger for Devin, gulf shrimp roll for me, cauliflower sandwich for Nick – was fantastic, but I have to take a moment to pay proper respects to the complimentary baguette they served before the meal.

Nick is a pastry chef and is usually a super harsh critic of baked goods. Like, to an entertaining degree. One of my favorite things to do upon spotting a deflated-looking croissant in the pastry case of a coffee shop is nudge Nick, point at it, and wait for the inevitable dramatic sighs and muttered comments — “That thing doesn’t even deserve to call itself a croissant!” I’m positive he was a temperamental Parisian chef de cuisine in his most recent former life. As you can imagine, getting a compliment from Nick about a baked good is a rare thing, a huge deal. And this baguette they served at Proof, this perfectly crunchy, chewy, light, airy, golden brown baguette? Nick deemed it the best baguette he’s ever eaten. We really should start carrying around a plaque and a mariachi band for such occasions. (The baguette was from Blue Dog Bakery, by the way. Well done! Your plaque is in the mail.)

I’d say lunch was the high point of the day, literally, because we were still riding a massive sugar high from the donut binge just before. Unfortunately you can’t soar on the wings of fried dough forever, and as soon as we left the restaurant we crashed in spectacular fashion. Suddenly the three of us had no energy. We dragged our feet in the heat of the early afternoon. The wind was picking up, strong enough now to knock you off balance. “I forgot how to walk!” I whimpered to Devin and Nick, who both seemed to be struggling too. We limped over to look at the Ohio River from a waterfront promenade, breathing heavily. We all stared at the choppy water in silence, surely thinking the same thing: “Why the fuck did we eat so many donuts on an empty stomach?” My head started pounding. Finally Nick said, “Cool bridge.” That seemed like as good a summation as any, so we got back in the car to go explore other neighborhoods. 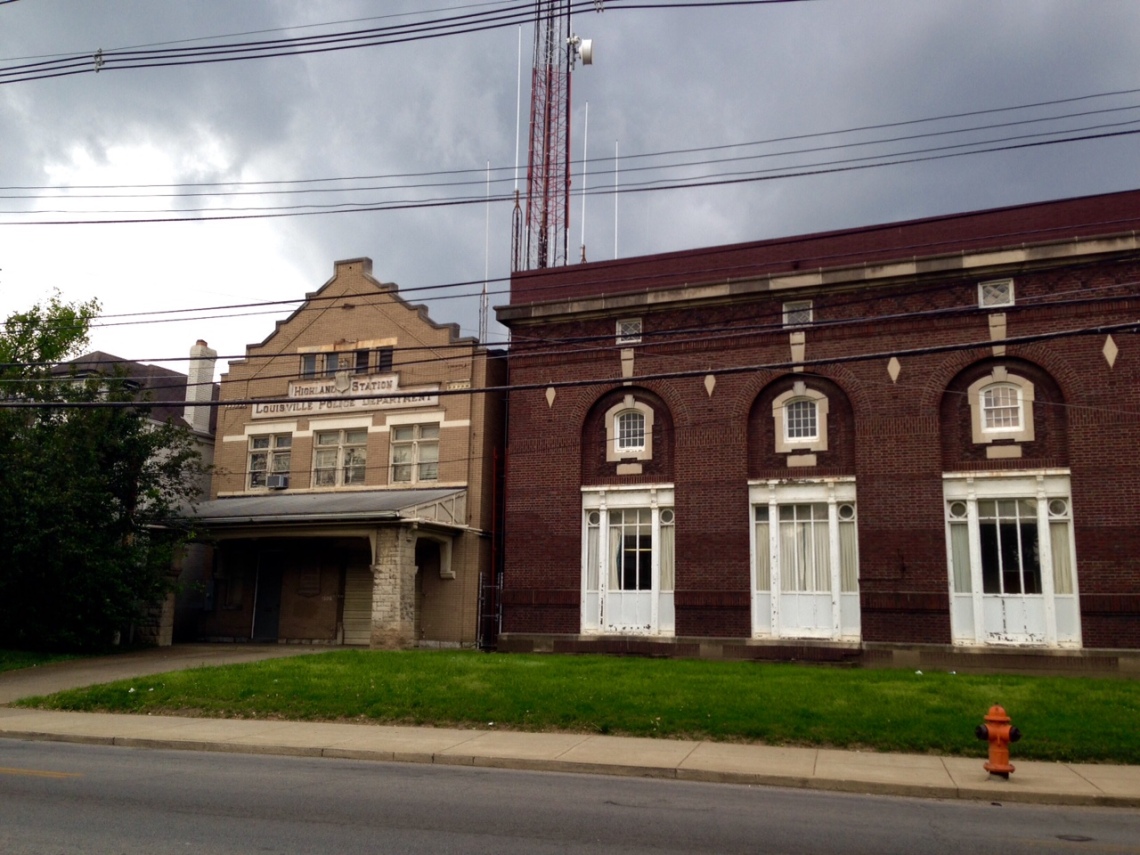 The next couple hours included a bit of shopping and browsing in NuLu, an area of little shops and cafes in beautifully restored old buildings, and a lot of sitting on benches staring into the distance. Somehow, late in the afternoon, we ended up walking slowly along Bardstown Road. I don’t even remember how we got there. “Louisville is so cool,” Devin said, “but all I want to do is take a nap in the car.” (The next day, a few hours after dropping Devin off at the airport, I would get a text from him: “Hey, I realized why I was being so weird in Louisville. I have the flu.”) We were about to call it a day and head home early when I noticed a bookstore on the next block. Carmichael’s Bookstore.

Last year Nick and I sat next to a man from Louisville at a wedding. We got to talking. He said he owned a bookstore. I was taking a break from writing at the time, and honestly, feeling so burned out I wasn’t sure if I would ever write again. This man told me to keep writing, and when Nick mentioned that I had written the first draft of a children’s book, he promised to stock it in his bookstore when it came out. I couldn’t remember for sure, but I think the name of that bookstore was Carmichael’s.

And what a beautiful bookstore it was. I looked around and unfortunately didn’t see my literary fairy godfather behind the counter (maybe he was off inspiring other frustrated writers), but I did see floor-to-ceiling shelves and quirky art work and a warm, welcoming space. Nick, Devin, and I split up into our favorite sections (cooking, history, and poetry, respectively). I plopped down on the floor with a stack of haiku anthologies and instantly felt my migraine subside. 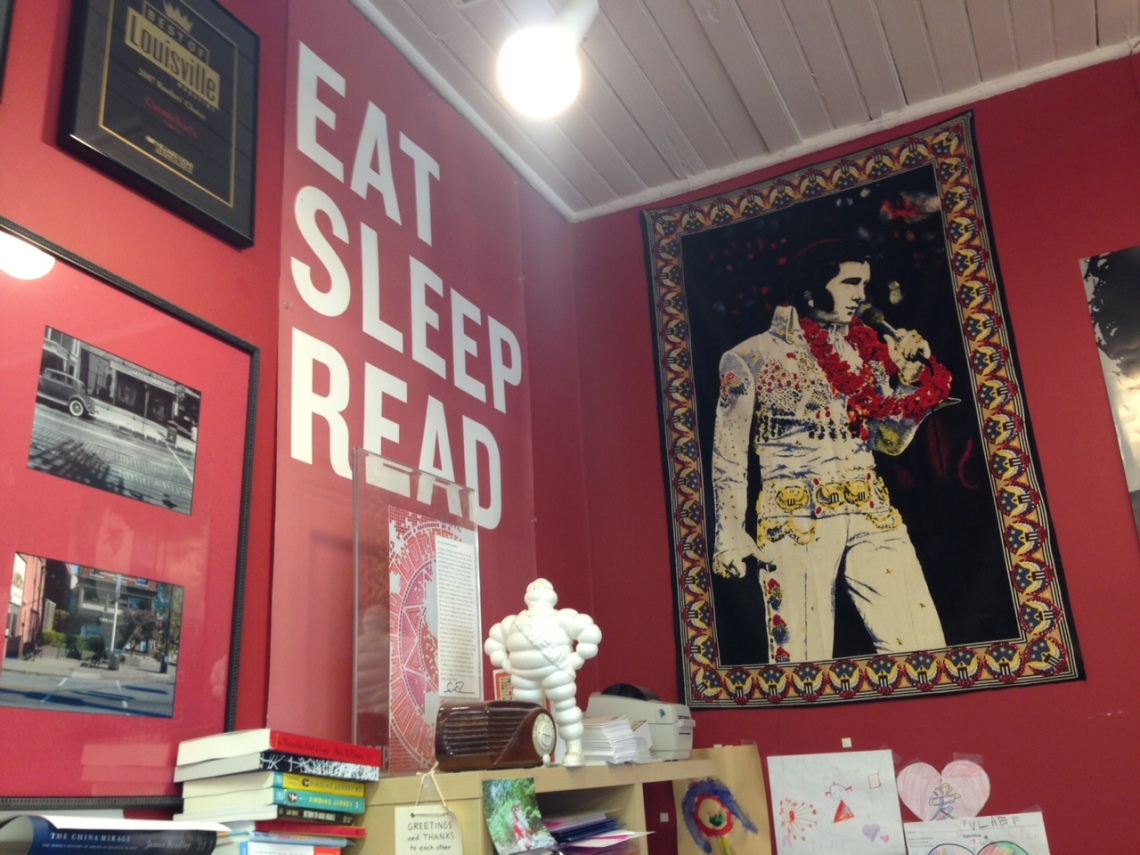 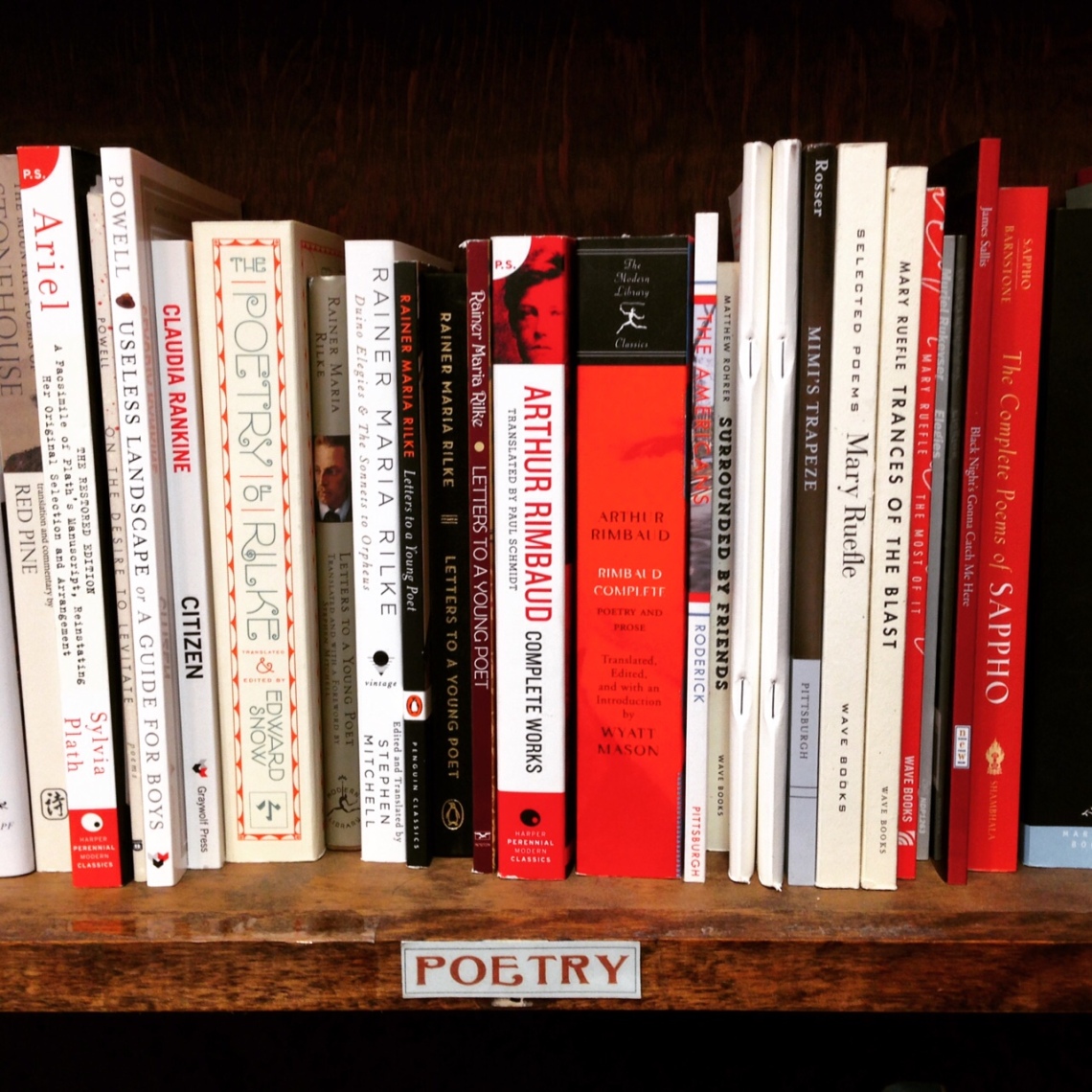 I don’t know if it was the quiet time, surrounded by the serenity of books, or the fact that the sky finally, mercifully let loose a massive downpour while we were there, but by the time we left the bookstore, the three of us felt rejuvenated and renewed. Within a few seconds we were completely soaked, but we were also cogent and energized and giddy for the first time since arriving in Louisville. Thank you, Carmichael’s.

Just down the road was an old church that had been turned into a bar called Holy Grale. We ran inside to escape the rain and get some food. Sitting upstairs, sipping beers, watching the rain pour on the roof outside the thick window panes, we all took a deep breath and reflected on the day. “We’ll come back here,” I said dramatically, raising my glass. “We’ll come back on a day when the weather’s better and we’re well rested and we won’t eat any donuts or just a normal amount of donuts, and we’ll have an amazing time.” Cheers. 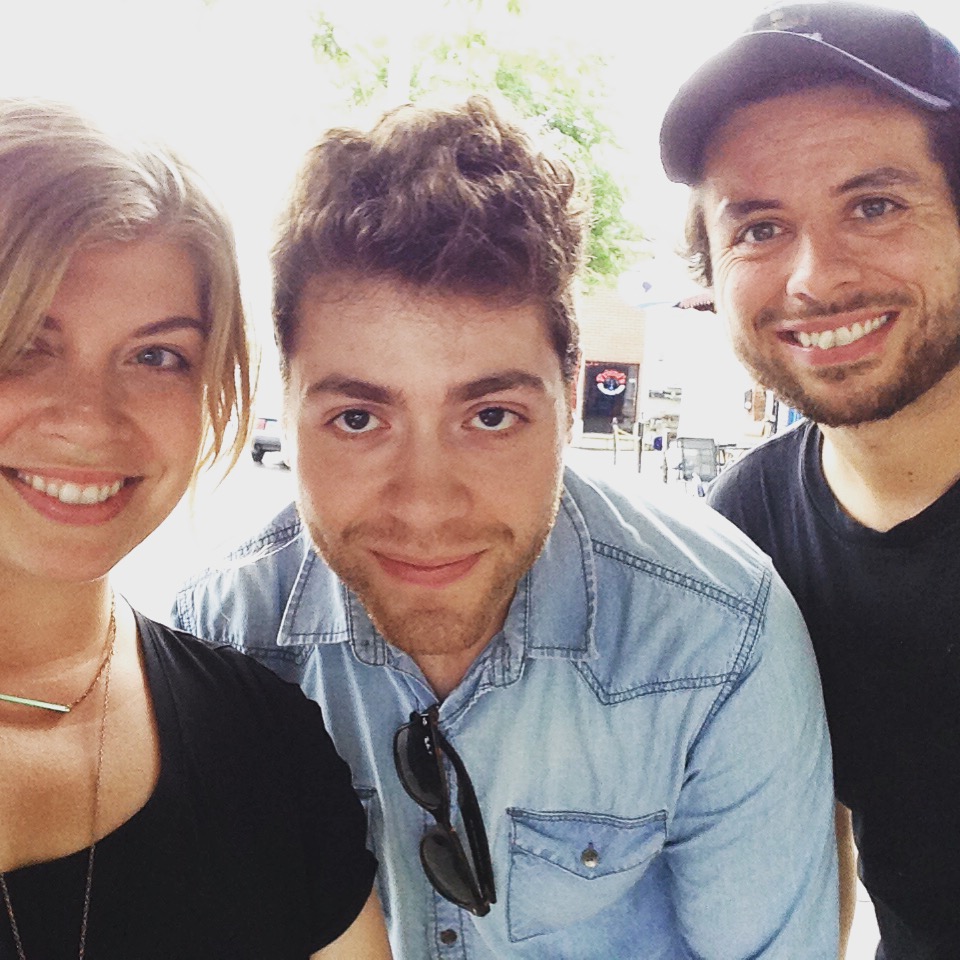 I was dreading driving back in the downpour, but as soon as we got in the car, the rain stopped. On the way home, we were treated to the most beautiful Kentucky sunset. Maybe the most beautiful sunset I’ve ever seen. Orange and blue brush strokes across the sky, framed by green rolling hills. It lasted for what seemed like a very long time. And we all watched it in silence, savoring every second.